What’s not to like? Family, friends, food, fun, music, commercials, and of course, football…right? Try not!

To start with, we knew who would win and who would lose even before the half-time show. How did we know, you ask? Well, ’cause Jenny said so! Now you’re asking, “Who’s Jenny?” Well, she is the most famous of pachyderms at the Dallas Zoo. The reason for her notoriety is her uncanny ability to pick the winner of  the Super Bowl. When Jenny was given the choice between two logo encrusted watermelons, Jenny stomped the Steelers and declared the Packer’s victorious. 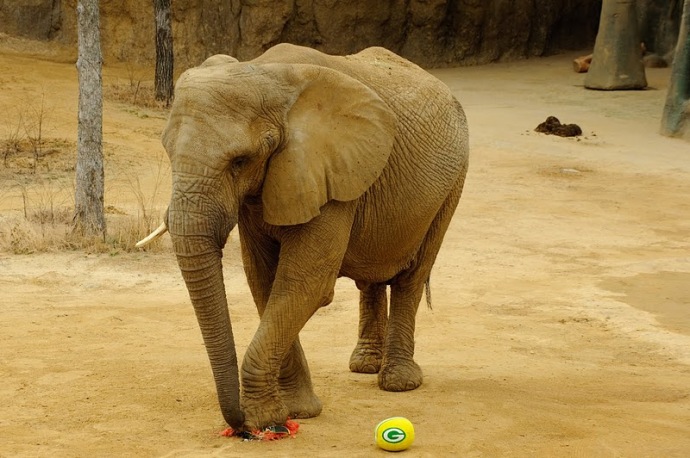 The next thing I have an issue with is that  if I calculated my age in “football time” with all of the timeouts, penalties, instant replays, and two-minutes warnings, I’d not only be older than Methuselah, I’d be dead. Ugh, even the coin toss seemed to take forever.

Then we have a professional singer messing up the National Anthem. When asked about the flub she responded by saying how nervous she was, that she’d been singing it since she was seven, and  “I can only hope that everyone could feel my love for this country and that the true spirit of its anthem still came through.” Hmmm…you wouldn’t make it through the first rounds of the Hollywood auditions on American Idol if you forgot the lyrics. Enough with the excuses Christina!

But wait, there’s more. We had the Black Eyed Peas lecturing the President of the United States on the current state of education and unemployment in America with the lyrics; “Obama, let’s get these kids educated / Create jobs so the country stays stimulated”.

This is from the same band who produces such hits as, “Let’s Get It Started” (originally titled “Let’s Get Retarded”) in which they called on the audience to “get stupid.” Hmmm….talk about the peas calling the kettle black…

And last but not least, Ozzy asking a most excellent question…what the *&#%$ is a Bieber?

Now, if you’re still with me after all that, congrats, you’re hardcore. And just in case you didn’t watch the game, the Packers did win 25-31…So, go Packers and Aaron Rodgers with his MVP and brand new Camaro!

Sometimes thinking outside the box and doing the unexpected is the surest way to success. Just ask these guys – who would’ve thought! Sure beats any of the highlights from the Seahawk’s game this weekend!!

Burlington Public Library Teens are hosting a Fantasy Football League open to teens ages 12-18 years old. Spots are limited and filling up fast so if you’d like to join call 360-755-0760 and sign-up today.

Here’s how it’s going to go down; the draft will be held after hours at the library on Friday, August 27 from 5-9 PM. After the draft we’ll watch The Longest Yard (PG-13) starring Adam Sandler complete with pizza and prizes!!!

The other day I had a teen come up to the desk, plop down in the chair, and tell me that he needed a sports book for school AND he doesn’t like to read. Okay. So, I asked him what sports he enjoyed watching and playing. Football, okay, cool. Let’s walk this way and it was almost like magic there were so many great stories to choose from!

It’s usually the first question people ask when I tell them that I went to see the movie, The Blind Side. Well, the movie was awesome with a great storyline, compelling characters, and it’s based on the book and true story, The Blind Side: Evolution of a Game by Michael Lewis. On top of that, no, it’s not about a blind kid!

Instead, this is the true story of a very large, very tall teenager who lives on the streets 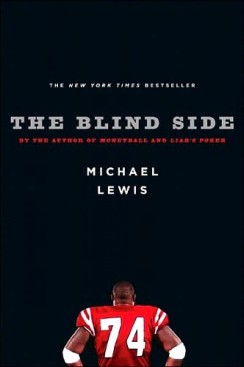 because his mother is a crack addict and as a result, her addiction has literally torn their family apart when he and his siblings were removed from their home at a very young age. In scene after scence we come to understand how much this has impacted his life but in a heartwrenching twist, we also learn that the kindness of strangers, who eventually become like family, can make all the difference.

In case you’re still wondering why it’s called The Blind Side, it refers to the value of the left tackle in protecting the quarterback’s blind side in the game of football. The movie relies on showing actual footage of the career-ending injury that snapped Joe Theismann’s lower leg as it buckled under the weight of a tackle by the Giants’ Lawrence Taylor. Consider yourself forewarned, it’s pretty nasty but since they show it in the beginning you could always go out to get the popcorn!